Popular posts from this blog

October 20, 2018
It is not enough to be right. It's more important to be effective. Pedestrians may have the right of way in a crosswalk. But I’m not going to step out, in front of a fast moving car, only to have my epitaph read “He was in the right.” At what point does protesting become complaining? At what point does tolerance become enabling. Partial answer: Protest, without action, is merely complaining. PR spin is the art of highlighting the truth in a lie or the lie in the truth. Is doing something wrong to correct another wrong the right thing? –––––––––– How to fix a broken heart:  https://youtu.be/k0GQSJrpVhM You need to get over the addiction. I call it the Mall Dance. There isn't a clear pattern, but it all works out without a single collision, like two galaxies colliding in the cold and vast emptiness of space. I feel like my wife and I teased either too meanly or we were too sensitive. With the old one, we teased too little. You and I do it best. Engineeri
Read more 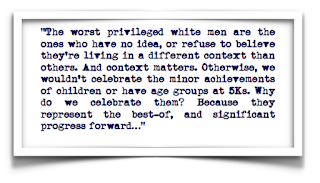 The worst privileged white men are the ones who have no idea, or refuse to believe they're living in a different context than others. And context matters. O therwise we wouldn't celebrate the minor achievements of children or have age groups at 5Ks. Why do we celebrate them? Because they represent the best-of, and significant progress forward. Context matters. Let money be the absolute quantitative decider and let love be the qualitative one.
Read more

October 11, 2017
It's not enough to be right. It is more important to be effective.
Read more